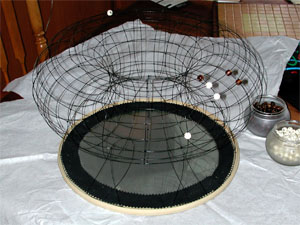 Go is one of the oldest board games, which has been played in pretty nearly its current form for 4000 years. Despite the long history, it's still possible to think of a new twist.   At the left is a "standard" 19x19 Go board constructed by Ken Clements, in the shape of a torus.   Each intersection of the wire frame is welded, and each bead (stone) is cross cut so it can be stuck to an intersection of the board.   This is the obvious solution for those who don't have the patience to study corner Joseki.

This completely changes the game, which is exciting! I wonder how the early game will change, with the removal of corners and edges.

I've played a few (smallish) games on a torus board over at http://cinderblock.zpmorgan.com/. One upshot is that all fights sort of bleed into each other, since there's no edge for them to get trapped up against; even with two fairly peaceful players, games tend to become one big whole-board fight. It gets kind of crazy!

You can do this on a normal board if you imagine the wrap arround.

I wonder how go differs based on whether you play on a Klein bottle, a torus, or the real projective plane.

I haven't tried this variant, but doesn't it actually make the game less interesting? Part of the strategy of Go is that some regions of space (i.e., corners) are more valuable that other regions of space. Making it uniform seems kind of bland to me.

Corners aren't more valuable. They are just "safer" in a certain way to aquire territory.

I would define value as the worth of the square (1 pt) divided by the amount of effort needed to secure it. Maybe we are splitting hairs though.

I agree Carbon. Corners are an incentive to fight. Removing them does make it less interesting.

I really think you would need to play the game on a torus for a few months before concluding that it is less interesting. You might very well be right though. It might turn out to be interesting in other ways.

Unfortunately there are hundreds of variants that could prove interesting. And with go, it took me a least 50 games before I really understood the struggle that makes the game interesting. If you play 50 games on a torus, I would be happy to hear your observations. I'm guessing one of your top 5 observations will be "Ladders are hell!"

I have played a few times, but my opponent wasn't so strong. One thing I definitely noticed was that living, in general, is harder. This is because there are no borders / corners, which are easy to make life in. However paradoxically, running is easier, because you can run for a long time before hitting anything (just like your remark on ladders). Put these together and they make the game much more aggressive, fighting, and less about territory (you need to build 4 walls to get any territory).

Nah, no fusing -- just connecting (via grid lines). Doesn't change the number of grid points. Or, another way of putting it is: start with a 20x20 and fuse the points on the border; then you get your 361 points.

This is what I was thinking was done... My mathematician friend and I used to play on the flat board like this. we would imagine the board wrapping around and play like that. Thanks for backing me up. 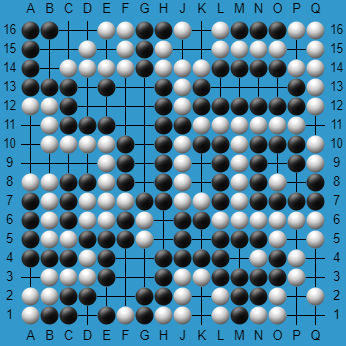